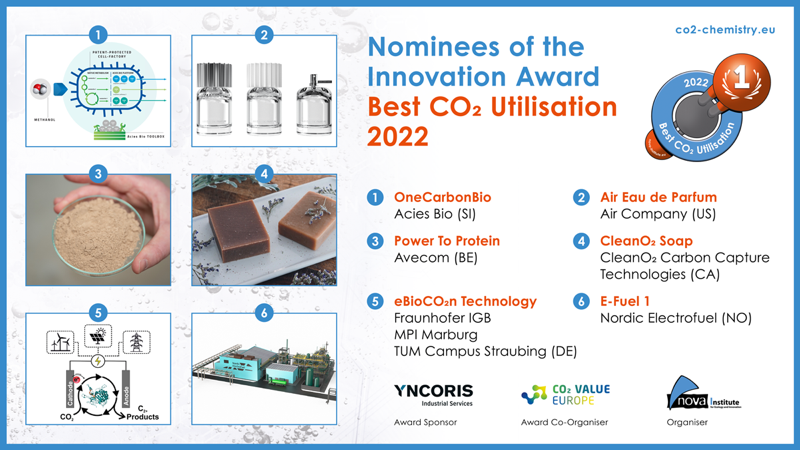 A fossil-fuel-based economy emits 1 billion tons of CO2 annually to produce industrial chemicals. To achieve net-zero goals by 2050 and limit the global temperature rise to 1.5 °C, the way we produce our raw materials must be redefined.
OneCarbonBio uses power of synthetic biology to improve and leverage microbes' ability to convert CO2 derived feedstock, methanol, into value added chemicals, such as plastic monomers or amino-acids. Using C1 feedstock we can achieve a significant reduction of carbon emissions and arable land usage for production of industrial chemicals. OneCarbonBio consists of patented chassis strains, industrial fermentation solutions and a powerful synthetic biology toolbox to generate strains capable of production of different classes of biological molecules in a rapid manner.

Air Eau de Parfum is the world’s first fragrance made from air. Inspired by the earth’s most abundant and vital elements of air, water and sun, it’s a genderless fragrance designed to be as Institute for Ecology and Innovation unconventional as possible. Each bottle created prevents 0.036kg of CO2 from being released into the atmosphere.
Using 100% renewable energy, the ethanol base, which is the most prominent alcohol used in fragrance, was created using the company’s proprietary Carbon Conversion Reactor technology which mimics photosynthesis by using air (CO2), water and sun (solar energy) to transform CO2 into impurity-free alcohols. This results in a carbon-negative formula. The ethanol is then formulated with water and their curated sequence of notes to create the scent and final fragrance which is fresh and citrusy with top notes of fig leaf and orange peel, heart notes of jasmine, violet and sweetwater and base notes of powdery musk and tobacco.

Avecom (BE) – Power To Protein

Power to Protein covers the sustainable production of protein-rich ingredients for human consumption. Avecom makes use of single cell micro-organisms or bacteria that naturally consume hydrogen gas and oxygen gas, both derived from green electricity by means of electrolysis, and a third gas - the greenhouse gas carbon dioxide - to produce a biomass rich in protein and vitamin B12. Further drying of the biomass will produce a powder that can be further applied as food ingredient. The Power to Protein process uses its additional resources like nitrogen without any loss to the environment, and is a net consumer, not an emitter, of carbon dioxide.

CleanO2® makes a revolutionary soap the old-fashioned way. Using 5,000-year-old know-how, the company makes premium natural cold-processed soap that contains captured carbon. The captured carbon, in the form of potassium carbonate, gives the soap a luxurious silky lather. What's more, even after the soap is used, the carbon remains sequestered.
But that's not the whole innovation. The sale of CleanO2 soaps helps fund the research, manufacture and installation of CarbinX™ carbon-capture units. This creates a virtuous business cycle.
As for the approach to carbon capture, CarbinX units are attached to the flues of natural gas heating appliances in commercial buildings. They convert the waste CO2 into potassium carbonate, before the carbon enters the atmosphere, using a patented process.

The eBioCO2n technology developed among Fraunhofer IGB, MPI Marburg and TUM Campus Straubing powers for the first time the selective incorporation of CO2 into highly complex molecules using green electricity. Its potential relies on the replacement of petrochemical based processes to directly build molecules using electrolyzers for CO2 reduction. The bioinspired
system is fed with electrons transferred through a viologen-based redox polymer into Ferredoxin-NADP+ reductase which converts the electrical energy into chemical energy in the form of NADPH used by crotonyl-CoA carboxylase/reductase to fixate CO2 into crotonyl CoA at rates of 1.6 ± 0.4 μmol cm-2 h-1 with 92 ± 6 % faradaic efficiency. eBioCO2n is a step towards achieving an energy and resource efficient circular carbon economy.

In E-fuel 1, the innovative set-up of the technology elements will be demonstrated for the first time at an industrial scale, located near to a CO/CO2 waste gas emitting plant and using ~ 12 % of their unavoidable emissions to produce synthetic crude. In E-fuel 2, all (100 %) of the furnace gas will be used, reducing GHG emissions with 480 000 tons/year. The pilot plant is expected to prove the calculated emission reductions during the project lifetime of 10 years. During this time, the upscaling will be realized at the same location, and the demonstration plant will be operated in parallel to prove further efficiency gains.